A Dog in the Life – Haibun Thinking

Still motivated by the temporarily suspended Haibun Thinking produced by his friend Al, AnElephant decides to continue his one-pachyderm assault on the elegant genre of Haibun.

A Dog in the Life
I admit I do get quite excited when he appears.
Okay, he has a really comical accent and doesn’t use the same words as Maman, but I try to make allowances.
I understand that he is a foreigner, from somewhere called Scotland.
Apparently it is quite far away, maybe near Toulon, I don’t know.
And he is AnElephant, although his nose is not really all that big!
But he does let me take him for long walks, sometimes for hours, which is why I like to see him.
We have covered quite a few miles, but I don’t think we have been to Scotland yet.
Although it was raining yesterday, so maybe.
The best thing is that he is good at finding sticks on the beach.
And he can throw much further than Maman, she is hopeless!
But he does not seem to realise just how chilly even the Med is in winter.
I mean, I make a point of shaking myself dry all over him, but he just laughs and tries to catch my tail.
Strange dude.
But my point here is meal times.
I am pretty civilised about food.
Okay, I might salivate a bit while Maman prepares it, but when she puts my dish down I wait until she moves her fingers before I start.
I admit I am quite a fast eater, I basically inhale a kilo and a half of meat and biscuits in about seven seconds.
Well, it is good stuff, no point in hanging around!
And then I am ready for a stroll.
But they sit down to eat.
And not just eat, but talk.
What is that all about, they have food in front of them and they are having a conversation!
So two hours later, if I am lucky, I drag them out the door.
Boy, by that time I am really ready!

we all have
our own needs
desires and dreams 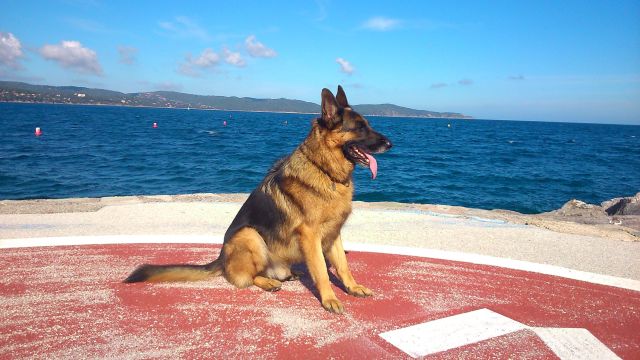 Like Loading...
This entry was posted in Daft Rhymes, Haibun and tagged a day in the life, a dog's life, flash fiction, haibun thinking, haiku, mediterranean, Scotland, short story, toulon. Bookmark the permalink.

8 Responses to A Dog in the Life – Haibun Thinking