The Haibun Ligo Challenge is a weekly event now hosted by Pirate and the ever energetic Ese.
Visit them for all the guidelines and background.
AnElephant’s choice of prompt this week is:
Water 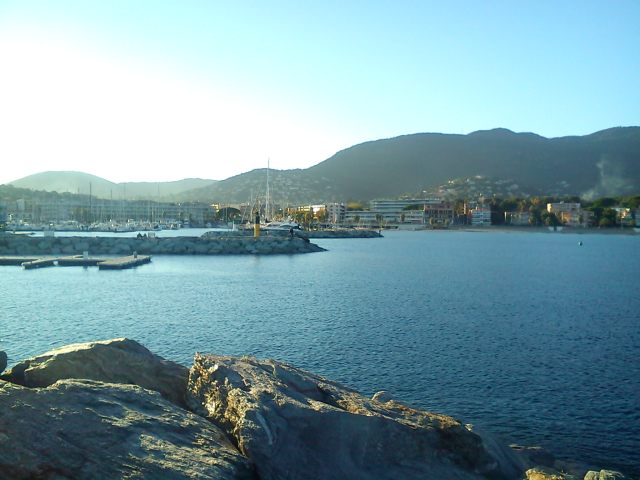 View from the sea wall by AnElephantCant

The waxing moon is up, two-thirds full now, climbing slowly, its transparency making it nearly invisible in the lightness of the sky, which is in dramatic contrast to the dark sea below.
It is due east of the rocks where he sits happily, if needlessly, gnawing on the end of his baguette.
The sound of the waves rumbles over the music in his ears, so he switches it off, apologising to Smokey Robinson as he does so.
The warmth of the sun on his back is pleasantly surprising, for it is 4 o’clock and almost mid-November.
On impulse he reaches again for his music, makes a new selection, and listens, entranced, as Luciano Pavarotti builds slowly to the climax of Puccini’s Nessun Dorma.
His world is truly a place of beauty.

He wanders out to the end of the Marina, and exchanges  pleasantries with a charming man, a Spaniard who lives in Toulon.
When he confesses to his current project, short stories in rhyme for children, he is assured by his new friend that this is a winner.
Everyone spends money on les gosses!
Children.
Great fortunes from his writing have so far eluded him with ease, but he knows that in many ways he is rich beyond his dreams.